Boeing P–8A Poseidon: Design, Development, Mission, and Specs. The Boeing P-8 Poseidon (formerly the Multimission Maritime Aircraft or MMA) is a military aircraft currently being developed for the United States Navy (USN). The aircraft is being developed by Boeing Defense, Space & Security, modified from the 737-800. 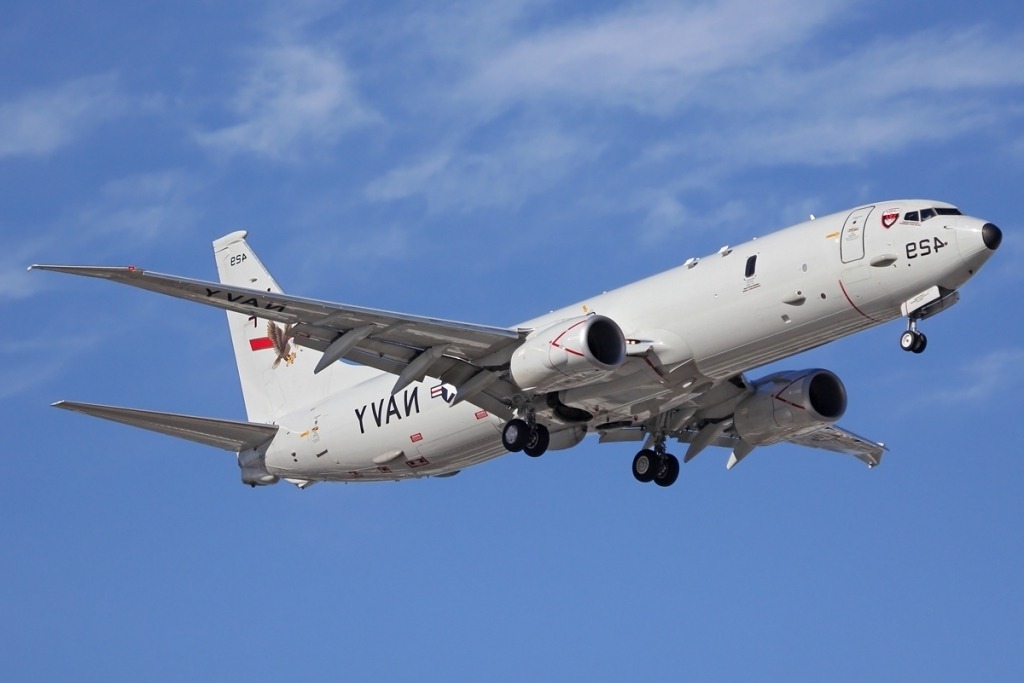 The P-8 is intended to conduct anti-submarine warfare (ASW) and shipping interdiction and to engage in an electronic intelligence (ELINT) role. This will involve carrying torpedoes, depth charges, SLAM-ER, Harpoon anti-ship missiles, and other weapons. It will also be able to drop and monitor sonobuoys. It is designed to operate in conjunction with the Broad Area Maritime Surveillance unmanned aerial vehicle. The P-8 has also been ordered by the Indian Navy.

The Lockheed P-3 Orion ASW aircraft has been in service with the U.S. Navy since 1962. In the mid-1980s the Navy began studies for a replacement aircraft for the P-3, which had its range and time on station capabilities reduced because of increasing weight and was approaching the end of its airframe fatigue life. The Navy specification also required reduced operating and support costs. In 1989, the Navy awarded Lockheed a fixed-price contract to develop the P-7, but the project was canceled the following year. 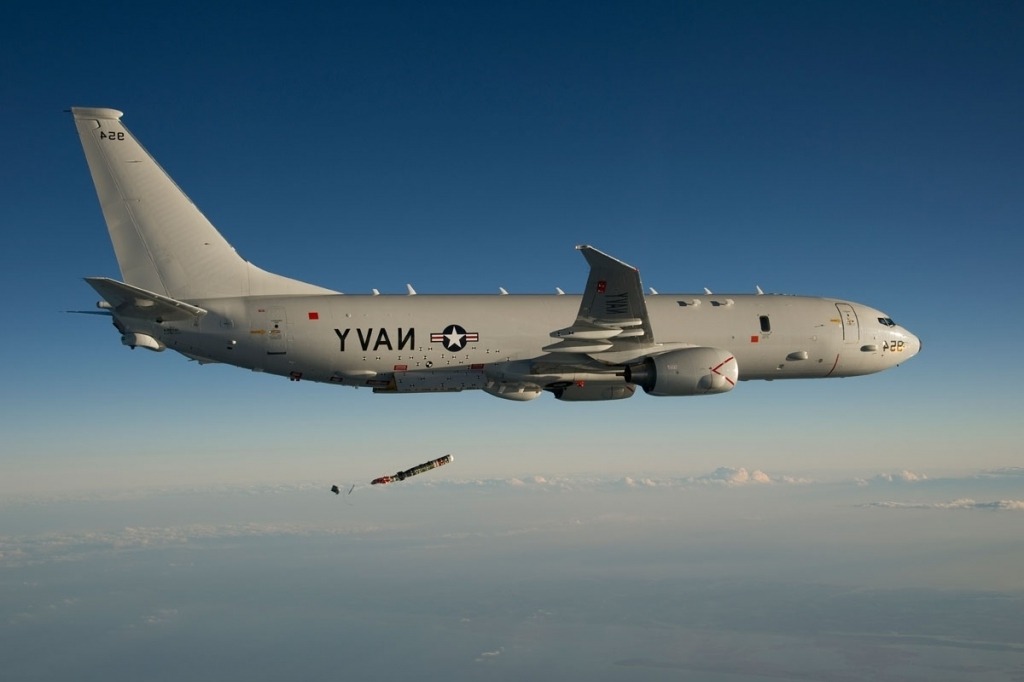 Boeing and Lockheed Martin were part of a new competition for a replacement aircraft begun in 2000. Lockheed submitted the Orion 21, an updated, new-build version of the P-3 turboprop. Boeing submitted a proposal centered around its 737-800 airliner.

BAE Systems offered a new-build version of the Nimrod MRA4, the newest version of the UK’s indigenous jet-powered maritime patrol aircraft. However, BAE withdrew from the competition in October 2002, recognizing the political reality that the failure to find a US-based production partner made the bid unrealistic. 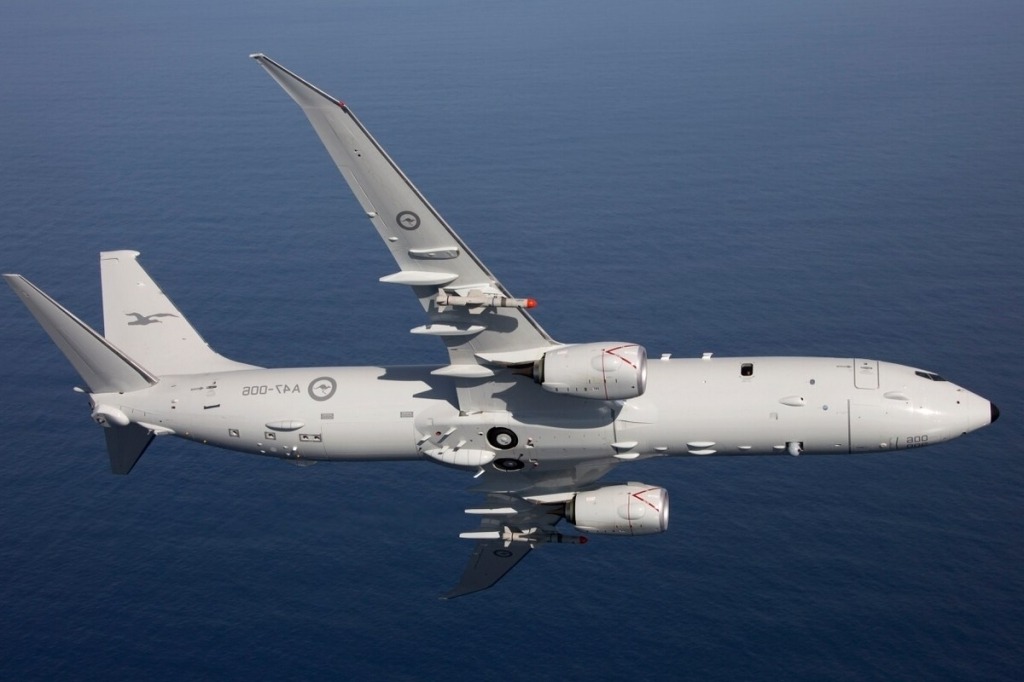 On 14 May 2004, Boeing was selected winner of the competition. [10] The following month the Navy awarded Boeing a development contract for MMA. [11] The project was planned to be for at least 108 airframes for the U.S. Navy. [12] More orders are possible from the other nations operating over 200 P-3s. Project value is expected to be worth at least $15 billion. Raytheon, Northrop Grumman, Spirit AeroSystems, GE Aviation Systems, Marshall Aerospace, CFMI, BAE Systems, and Marotta are major subcontractors.

In July 2004, the U.S. Navy placed an order for five MMA aircraft. The first flight-test aircraft was to be completed in 2009 before beginning testing. The first aircraft, a test aircraft, is to be converted to production standards at a later date. Boeing’s MMA aircraft received the P-8A designation on 30 March 2005. The Navy later ordered another five aircraft.

The P-8 is based on a proven airframe design and will at first be equipped with legacy P-3 systems with later upgrades to more advanced technology. Timely replacement of the P-3s is vital because their airframes are breaking down from age and use.

In mid-2008, the Naval Air Systems Command (NAVAIR) deleted the requirement for the P-8A to be equipped with magnetic anomaly detection (MAD) equipment. This was part of a NAVAIR-directed effort to reduce P-8A aircraft weight by 3,500 lb (1,600 kg) to improve aircraft range and endurance. P-8Is destined for the Indian Navy will continue to retain MAD. The P-8A will use a new hydrocarbon sensor to detect fuel vapors from diesel submarines and other conventionally powered ships.

In 2011, it was found that the ice detection system on the P-8 was defective due to the use of several counterfeit components. It is alleged that these substandard parts had been poorly refurbished and sold to P-8 subcontractor BAE Systems as new by a supplier in China.

The first production P-8A was handed over to the Navy on 4 March 2012. It flew to Naval Air Station Jacksonville, Florida, where it will be used for aircrew training with the Fleet Replacement Squadron (FRS), Patrol Squadron 30 (VP-30). On 24 September 2012, Boeing announced it had received a $1.9 billion order for another 11 aircraft. It has delivered the first three P-8As.

On 10 June 2013, a DoD Inspector General (IG) report noted that the Navy should delay full-rate production for the P-8, as they lack critical information necessary about whether the aircraft meets operational requirements to perform primary missions. Additional testing also needs to be completed to guarantee a 25-year lifespan for the airframe. Boeing executives dismissed the report, saying the flight test program is on track.

On 24 June 2013, a P-8 Poseidon successfully fired a live AGM-84D Block IC Harpoon anti-ship missile scoring a direct hit. The test was to validate the weapons’ hardware and software integration onto the aircraft.

Nine low-rate initial production aircraft have been delivered to the service.

On 31 July 2013, Boeing received a $2.04 billion contract to build 13 P-8A Poseidons as part of the fourth low-rate initial production lot. Deliveries from the fourth lot will raise the fleet to 37 aircraft by the end of 2016. Full-rate production has been delayed until the aircraft demonstrates it can survive its 25-year lifespan without structural fatigue, overcome mission-limited deficiencies, track surface ships, and perform other primary missions.

Boeing approached the U.S. Air Force in 2010 about replacing the E-8C Joint STARS fleet with a modified version of the P-8 at the same cost Northrop Grumman proposed for re-engining and upgrading the E-8s. The proposed version is named P-8 Airborne Ground Surveillance (AGS) and would integrate an active electronically scanned array (AESA) radar, and have ground moving target indicator (GMTI) and synthetic aperture radar (SAR) capabilities.

The main distinguishing feature of the P-8 AGS is pod-mounted radar, fixed to the lower centerline of the fuselage; the pod is lowered so the engine nacelles do not interrupt the radar’s line of sight. Two aft ventral fins on lower aft provide stability for the aircraft. The P-8 AGS also uses the P-8A’s Raytheon AN/APY -10 multi-mission surface search radar. Boeing has campaigned for a fleet of P-8 AGS aircraft instead of re-engining the E-8s. The Air Force’s Analysis of Alternatives (AoA) of the JSTARS platform began in March 2010 to review options for performing the JSTARS mission. An initial decision on the AOA was expected in September 2011. At a Senate Armed Services Committee meeting on 20 March 2012, the Air Force said they did not have the resources to buy a new business-class ISR platform.

The P-8 features the Raytheon APY-10 multi-mission surface search radar. The aircraft also includes six additional body fuel tanks for extended range from Marshall Aerospace; three of the tanks are located in the forward cargo compartment and three in the rear. This receptacle will receive a flying boom that is typically used to refuel US Air Force aircraft, as opposed to the hose-and-drogue system used by other US Navy aircraft.

In U.S. service, the Poseidon will be complemented by around 40 MQ-4C Triton UAVs for the Broad Area Maritime Surveillance system to provide continuous surveillance. Because of the cancellation of Lockheed Martin’s Aerial Common Sensor project, Boeing will propose a signals intelligence variant of the P-8 to service the requirement for the U.S. Navy.

In February 2012, the P-8 made its mission debut during “Bold Alligator” 2012, an annual littoral warfare exercise. In April 2012, the aircraft took part in Exercise Joint Warrior, flying out of RAF Lossiemouth. During RIMPAC 2012 in the Hawaiian area, two P-8As participated in 24 exercise scenarios as part of Air Test and Evaluation Squadron One (VX-1) forward-deployed at Marine Corps Base Hawaii in Kaneohe Bay. Initial operating capability is expected in 2013.

U.S. Navy P-8s may rotate through American allies such as “the Philippines or Thailand to help those nations with maritime domain awareness.”

The Australian Minister for Defence announced on 20 July 2007 that the P-8A MMA had been selected as the preferred aircraft to replace the Royal Australian Air Force’s fleet of AP-3C Orions in conjunction with a yet-to-be-selected unmanned aerial vehicle. The last RAAF AP-3C is scheduled to be retired in 2018, after nearly 30 years of service. In March 2009, Australia’s Chief of Air Force stated that subject to anticipated government approval, the RAAF would begin to add the P-8 to their fleet in 2016.

In October 2012, Australia formalized its participation in the program with a commitment of A$ 73.9 m (US$ 81.1 m) in an agreement with the U.S. Navy. Eight P-8 aircraft are planned to replace the RAAF’s AP-3C aircraft by 2017-18, and reach operational capability by 2019. Air Marshal Geoff Brown, head of the Royal Australian Air Force, has said Australia is considering purchasing more manned P-8 Poseidons, and reducing the number of MQ-4C Triton unmanned aircraft than it originally planned to buy.

In January 2008, Boeing proposed the P-8I, a customized export variant of the P-8A, for the Indian Navy. On 4 January 2009, India’s Ministry of Defence signed an agreement with Boeing for the supply of eight P-8Is at a total cost of US$ 2.1 billion. These aircraft would replace Indian Navy’s aging Tupolev Tu-142M maritime surveillance turboprops. Each aircraft has an average cost of about US$ 220 million. he deal makes India the first international customer of the P-8, and also marks Boeing’s first military sale to India. In October 2010, India’s Defence Acquisition Council of the Ministry of Defence approved the purchase of four additional P-8Is. In March 2011, it was reported that India was to order four additional P-8s from Boeing later in the year. India plans to order another 12 P-8Is at a later time.

The Data Link II communications technology for the P-8I was received by Boeing from Bharat Electronics Limited in April 2010. The communications system will enable exchange of tactical data and messages between Indian Navy aircraft, ships and shore establishments. Boeing will install the system during P-8I final assembly. The IFF, system from BEL was also handed over to Boeing for integration with P-8I in December 2010. India buying AGM-84L Harpoon Block II Missiles and Mk 54 All-Up-Round Lightweight Torpedoes for the P-8I.

Flight testing of P-8Is began in July 2012, with deliveries planned to start in 2013. The first P-8I was handed over to an Indian naval team at the Boeing facility at Seattle on 19 December 2012. The Indian Navy is to fly it to India along with the second and third aircraft after they are handed over in May and June 2013. The Indian Navy inducted its first Boeing P-8I Poseidon aircraft on 15 May 2013.

The UK has indicated it is not interested in a “silver bullet” solution like the P-8. Boeing is now repackaging the P-8 systems in a cheaper airframe, the Bombardier Challenger 605 business jet. This proposed Maritime Surveillance Aircraft (MSA) has been depicted with the AN/APY -10 radar, an electro-optical sensor in a retractable turret, and a CAE Inc. magnetic anomaly detector.

P-8A Poseidon – Production variant for the U.S. Navy.
P-8I Neptune – Export variant for the Indian Navy. P-8 AGS– An Airborne Ground Surveillance variant proposed to the U.S. Air Force in 2010 as an alternate to upgrades to the Northrop Grumman E-8 Joint STARS fleet. Its design adds a pod-mounted, active electronically scanned array (AESA) radar on the bottom of the fuselage. 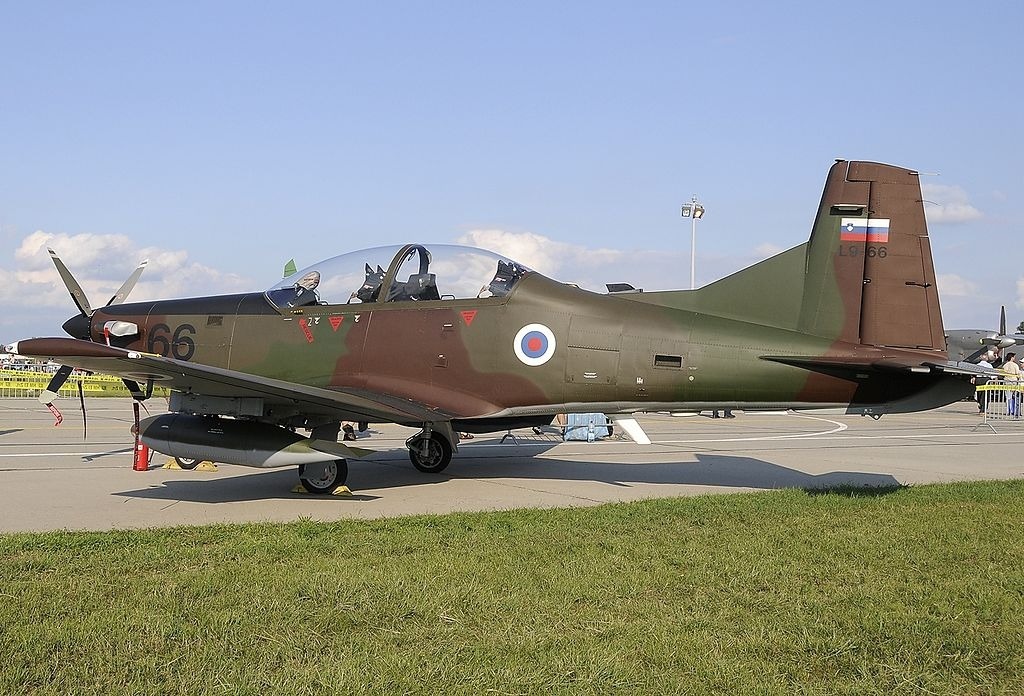 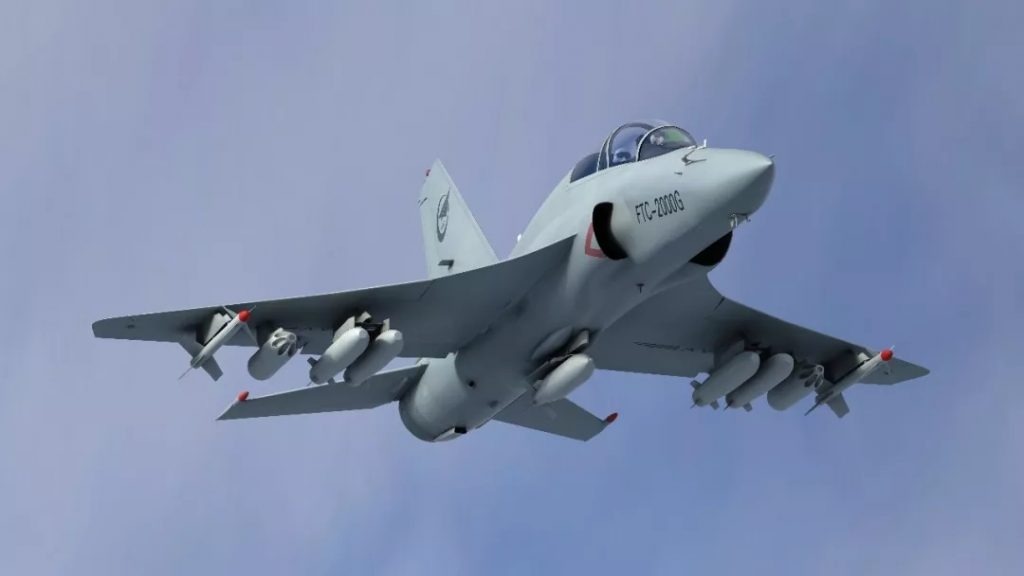 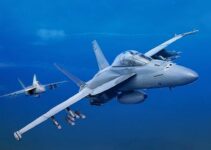